Xavi is one of the most respected football players of all time. He is a top class professional who has dedicated his footballing career to the team that he loves. Xavi was always a good player, with his passing ability to match his fantastic vision and he influences games like no other play. But what stands out with Xavi is that even now, going into early 30’s, he is still improving as a player and is still regarded as one of the best footballers in the world. Xavi proves to the footballing world, that to be a great player you don’t need huge amounts of pace and strength, but a good footballing mind. Xavi has changed the view on the way people look at football, and that’s why he is truly an inspiration. 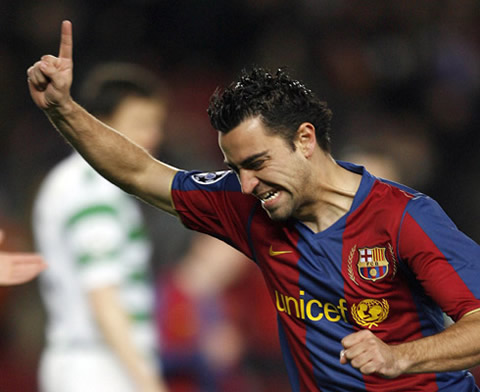 Xavi has been playing at Barcelona for 20 years as he entered their youth system in 1991. The Barcelona youth system has always been successful as they train their players to be better at passing, and ball control and both are more important than any other ability. Xavi once said that when he was younger, losing to bigger and stronger teams wasn’t an issue, as long as they played good football, and as you can tell from his performances with Barcelona recently, it has proved to be really successful. Xavi has scored 38 times in his Barcelona career, but he holds the record for most assists and more or less every game his pass completion is the highest percentage. Xavi is integral to Barcelona and he is been so successful, winning 3 Champions League’s and winning the La Liga 6 times. Xavi has also been pivotal in Spain’s continued success winning the European Championship in 2008 and then the World Cup in 2010.

Personally, Xavi is one of my favourite players of all time. No matter who the opposition is, Xavi and his midfield team mates always control the game. His passing and understanding with fellow players is outstanding. A Barcelona team without Xavi would not click with Xavi in, and you could argue Xavi is so pivotal that even a Barcelona team without Messi could be better off. Xavi does have some of the greatest footballers playing around him, and it makes his life certainlty easier, but players like Xavi bring the best out of the likes of Iniesta, Messi, David Villa, Pedro and the rest. This player will be 32 next year, but hopefully more years to come, and Barcelona will need to somehow replace this legend once he goes.