Neymar Da Silva Santos is one of the most highly praised soccer players today and with only 19 years of age already some of the best European clubs are attempting to sign him with offers of around €40 million.

Being one of the most skilled and talented players makes his Brazilian club Santos, trying to keep hold of him for as long as possible. According to the Spanish media Santos has already rejected an offer bid of €45 million for the 19 years old striker and will only review offers until 2011 has ended.

Neymar is currently playing at the Copa America with his national side Brazil and helped them defeat Ecuador with a brace he scored alongside Alexandre Pato who also scored 2 goals.

The agent of Neymar Wagner Ribeiro told the press that he is not sure on how will Real Madrid accept the decision of delaying the transfer and having to wait further in order to secure the services of Neymar.

“Real want an immediate transfer and I don’t know what they would say if this doesn’t happen,” Wagner Ribeiro stated. 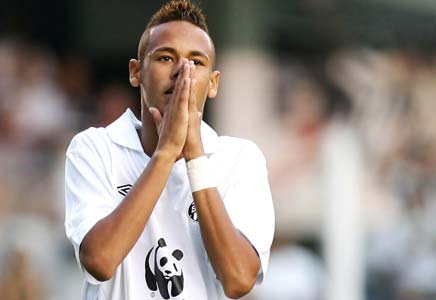 “Will they pull out? I don’t know. I just know that it is what Neymar wants, he dreams of being a world champion with Santos.”

If Santos manages to keep Neymar until 2012, then Real Madrid is going to need and look for a alternative as they can’t wait that long to sign Neymar and all the fingers are pointing towards Emmanuel Adebayor and Sergio Agüero.

Adebayor recently joined the Spanish titans Real Madrid through a loan deal and now the Togolese striker wants to make a more permanent solution and he also desires to leave Manchester City as soon as possible and so this could mean that a move to Real Madrid is not so far away from his reach.

Lastly there are talks involving Sergio Agüero of Atletico Madrid who also has desire on leaving his club and already some rumors are saying that the number 10 is waiting for the Argentinean player.

Nonetheless nothing has been confirmed on who will be the next striker of Real Madrid but it’s only a matter of time until they open their wallet and make cash out for a player.