David Moyes’ future as Manchester United manager looks increasingly uncertain after another placid display at the weekend saw them drop further away from the title race.

Adam Lallana’s 89th minute goal earned Southampton a deserved 1-1 draw at Old Trafford on Saturday, stunning a United crowd so used to watching their side see out games.

Since Sir Alex Ferguson left the managerial post, United have suffered a downturn in performances and results, having won just five of 11 in all competitions this campaign, and the pressure on Moyes’ future is now mounting. 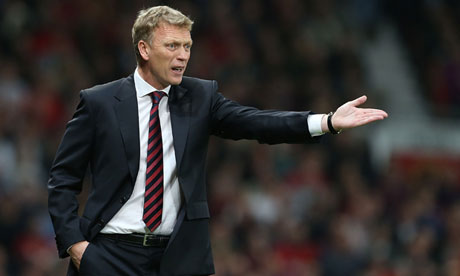 The former Everton boss admitted there’s a fear in the team but refused to concede Sir Alex’s departure had anything to do with his players’ reversal in fortunes of late. Sadly, for United punters who bet on football, the stats don’t lie.

As of Sunday morning, United have won just one league game since mid-September, average the ninth-most shots per game (13.6) and 1.25 goals per game. Compare that to Sir Alex’s ultimate season (14.8 shots on goal and 2.4 goals a game) and you begin to realise this team is in decline.

But what can Moyes do about it? There’s no transfer window to play with but he still has a strong group of players at his disposal. Wayne Rooney is in great form for club and country while Adnan Januzaj is practically a new signing. Those who enjoy football betting online would like to see Robin van Persie chip in with a few more goals but he did his job at the weekend.

The blame seems to lie in an ageing defence that doesn’t have adequate cover (Moyes’ choice of Phil Jones and Jonny Evans in the middle worked only to an extent on Saturday) and the usefulness of Marouane Fellaini. A crowd that saw the Belgian rip them apart two seasons ago would dearly love to see him cavort further forward and, with Michael Carrick holding, it is surprising Moyes doesn’t give the former Everton man more free reign.

Moyes must get this team ticking, especially in midfield, if he’s to come close to challenging for the league this season. Should his team continue to stutter pressure will mount further and there’s a limit to the amount of patience this winning fan base will endure.