Neymar is one of the most talked about youngsters in world football today. His first few seasons of professional football has been a success, and people around the world are seeing his potential, and could be one of the Brazilian greats. Neymar has the Brazilian flair, combined with trickery, pace and the ability to perform on different stages, not being shy of what he can produce. Neymar has been linked with many huge European teams this summer, although it seems he is staying put at Santos, and the club president said once that want to keep him for life and make him the new Brazilian icon. 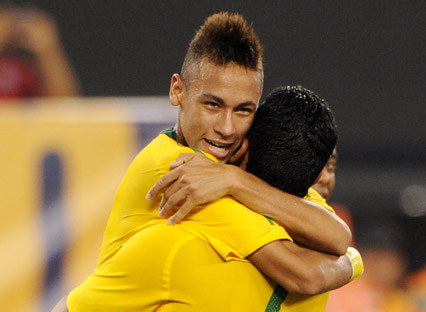 Neymar has been playing for Santos since he was 16, and his performances are already drawing comparisons to former Brazil greats like Pele, Ronaldo and Robinho. Neymar has got a lot of interest from all European clubs, but Santos are strongly determined to keep their man, and have put a huge price tag on him. Neymar played for under 17 Brazil and under 20’s Brazil, but is now more and more involved with the actual squad and is hoping to be the main man when Brazil participate in the World Cup in 2014, which of course, they host. Neymar has impressed for Brazil, especially when he played in England at Arsenal’s Emirates stadium against Scotland and scored two goals, both being well executed finishes. He has scored other goals for Brazil, including the Copa America of 2011 against Ecuador. His most famous goal so far was quite recently against Flamego, where he started the build up, and then finished it off using great bits of unique skill which hasn’t been seen before. He also has the composure to finish it well, and a goal which we’ll look back on for some time.

Will Neymar become one of the world greats? There is no doubt that this player has the potential, but footballers need more than that in this day in age. Footballers need to control their lifestyle, and work over and over in the training ground. Players like Ronaldo, and Messi have been fantastic in the way they have conducted themselves, and Neymar will need to watch and learn. Some footballers are hyped up too much and it gets to the player, and stops their development. I’d love to see Neymar excel into a fantastic player, and 2014 may be time for him to shine as he will be 22 when the tournament begins, and people will have expected him to reach his best.