Everton boss, Roberto Martinez, has allayed fears that Darron Gibson’s season is over after the midfielder damaged his anterior cruciate ligament during the Republic of Ireland’s World Cup qualifier against Kazakhstan.

It was originally thought that the 25-year-old former Manchester United star’s injury was so severe that he would be facing a nine-month lay-off, but Martinez is hopeful that Gibson will still have a part to play in Everton’s campaign. 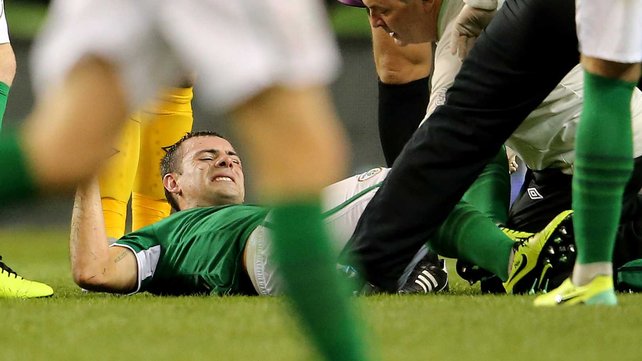 The former Swansea City and Wigan Athletic manager said: “I was expecting the worst but after the scans we are really positive now.

“It is an anterior cruciate ligament but the whole structure of the knee is perfectly fine and it is going to be straightforward surgery.

“I am looking forward to seeing him back hopefully this season and in that way it was good, positive news taking into consideration what it could have been.”

Gibson missed the start of the season because of another knee problem and had only just returned to the international scene after opting out of the Republic squad during the final 15 months of former boss Giovanni Trapattoni’s reign after being left on the bench throughout the Euro 2012 finals.

After betfair pundits reported that he was available for selection again following Trapattoni’s departure last month, interim boss, Noel King, called him up for the final two qualifiers against Germany and Kazakhstan.

Gibson played against Germany but had to be treated on the pitch for several minutes during the 3-1 win against Kazakhstan before being stretchered off by medics with his right knee heavily bandaged.

Martinez has already has to contend with injuries to Steven Pienaar and Antolin Alcaraz this season but has managed to guide Everton to a strong start to the campaign.