The Germans have a 100% record and will be playing the surprise package which are the Greeks on Friday night.

Germany and Greece have played each other twice at the Euros. Once during the final qualifying stage for Euro 76 which ended in a 1-1 draw, and then again at Euro 80, this time finishing 0-0. Doesn’t bode well for an entertaining encounter, but the Germans won’t mind as on both occasions they progressed to the final, winning one and losing the other on penalties to Panenka and his famous chip.

Key Player (Germany) – Mario Gomez. With a supply chain featuring Schweinsteiger, Ozil, Mueller and Podolski, it’s going to be down to Gomez to put the chances away. On a few occasions I have witnessed Gomez and thought he’s needed numerous chances to put the ball in the back of the net. Against the Greeks you can see these chances being kept to a minimum so it’ll be down to Gomez to score when given the opportunity. Fortunately for the Germans, he seems to be doing just that so far in this tournament. 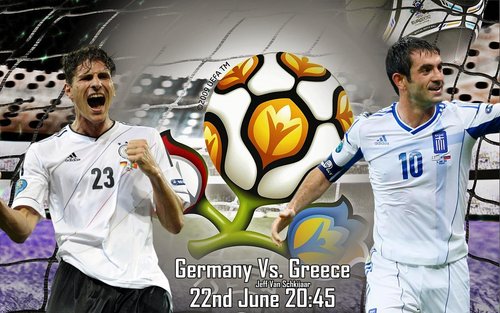 Key Player (Greece) – Giorgos Karagounis. The warhorse that is Karagounis is battling on. He has been involved in everything Greece have done. He’s missed a crucial penalty, and scored the vital goal against the Russians, whilst also being booked for what the referee perceived to be a dive in the same game, when most thought it was a penalty. He’s sure to be involved, the Greeks will hope that it affects the team favourably.

Missing Men (Germany) – Mario Gotze. Germany aren’t missing any key players, and the only player who was facing suspension, Jerome Boateng, has served his ban and will replace Lars Bender at right back for the game against the Greeks. However, a player that many neutrals are hoping to get a glimpse of is Mario Gotze. The Dortmund player has been a central figure in the club achieving back to back titles and many of us are hoping to see some of those skills this summer.

Missing Men (Greece) – Sotiris Ninis. Workrate, grit and determination is what describes the Greeks. And woeful finishing if you include Giorgous Samaras. The one player who has got a creative spark has struggled with injury and has found himself on the fringes of the team, with more battle hardened players in his place. Unfortunately for Greece, their spark doesn’t seem to want to catch alight at these championships, but they could do with the creativity he showed in the Champions League a couple of seasons ago which got Manchester United interested in him.

Prediction – There have been a few surprises in this tournament, however, the Germans have been their normal efficient selves. I expect them to qualify here in a low scoring game.