The last quarter final see’s the Italians meet the English on Sunday evening.

The last time these two met was during the group stages of the 1980 Championships. Italy played out a 1-0 win which eliminated the English from the competition.

Key Player (England) – Steven Gerrard. Gerrard has been the best player for England so far and has been key to everything England have done well. Claiming 3 assists and performing the captain’s role, Gerrard will need to once again be on his best form to help England conquer the Italians. So far he has controlled the game and his positioning and smart use of the ball has helped England to be solid in defence, whilst his crossing has been dangerous. England will hope that he remains playing like this and doesn’t try and do too much and begin resorting to the Hollywood ball he is occasionally guilty of.

Key Player (Italy) – Andrea Pirlo. This isn’t the most talented Italian team, but it is functional and in the middle of the park they have one of the world’s greatest midfielders. Keeping Pirlo quiet will keep Italy quiet. Having broken the deadlock with a change of pace and pass to set up Di Natale against the Spanish, scoring a free kick against the Croatians, and taking the corner which opened the scoring against the Irish, this Italian team needs Pirlo, because without him, they don’t look like scoring. 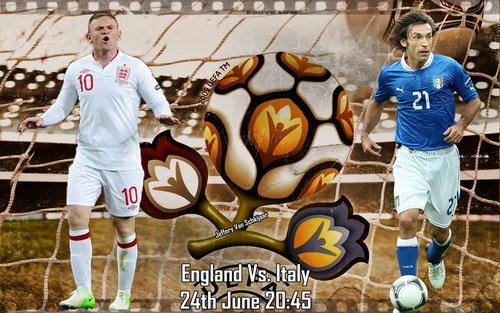 Missing Men (England) –Wayne Rooney of 2004. England have changed their tact for this tournament, and are relying on Hodgson’s disciplined approach to grind out results. This went to plan against the French and the Ukraine, and apart from a 10 minute period, worked against the Swedes. However, you feel that for England to go further in this tournament, they need someone special. Walcott and Welbeck have shown glimpses of game winning talent, but the player who could win any game is Wayne Rooney. Or at least the Rooney of 2004. Rooney has matured since then and is a different, albeit still dangerous, player. His performance wasn’t the best against Ukraine, and anyone could have scored that goal, but England need an on form Rooney to have a chance of winning this tournament. How the English wish they could have the Euro 2004 version.

Missing Men (Italy) – Giorgio Chiellini. Italy have always had great defenders, from Baresi, to Maldini, to Cannavaro and Nesta. Now they rely on Chiellini, who although not in the same class as those mentioned before, is the best they have. For him to miss out is a big blow to the Azzurri and they’ll be hoping that Andrea Barzagli, recently returning from injury, and Leonardo Bonucci can strike up a partnership, which theoretically shouldn’t be too much of a problem as they are club mates at Serie A’s unbeaten Champions Juventus.

Prediction – A tight game that could go to penalties. Not many chances, it may be down to a Pirlo or Gerrard delivery that decides it.