The first of the quarter finals is shock group winners Czech Republic against the Portuguese who did enough to knock the Dutch out on Sunday.

These two have met twice before at the European Championships. The first of those meetings is famous for one of Championships most memorable goals. Karel Poborsky sealed his move to Manchester United with the scoop shot of all scoop shots to give the Czech’s a 1-0 win and put them into the semi-finals of Euro 96.

They also met 4 years ago in the Group stages and a Ronaldo inspired team eased to a 3-1 win to earn qualification with a game to spare. Ronaldo scored once and set up the other two. The Czech’s had to then beat Turkey in the final game to qualify and we all remember the mistake by Petr Cech that inspired a Turkish comeback. Both of these players may well have a big part to play should their team progress to the semi-finals. 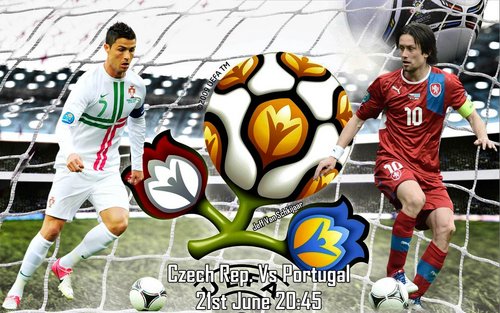 Key Player (Czech) – Petr Cech. Cech has had his best season in a long while for Chelsea, but he still has something to prove at the Euros. Having been to blame for their exit in 2008 and making a similar mistake, although this time not costly, against the Greeks, he will be hoping to be at his best. And you have to feel that for the Czech’s to qualify, they are going to need him to pull off some saves and nick a goal at the other end.

Key Player (Portugal) – Cristiano Ronaldo. With an incredible 13 shots on target this tournament so far, he has been everywhere for the Portuguese. In the first couple of games it looked like this wasn’t going to be his tournament, but he turned it on when needed against the Dutch. He has now scored in 5 consecutive tournaments for Portugal.

Missing Men (Czech Republic) – Tomas Rosicky. Rosicky will be a big miss if his achilles doesn’t heal in time. Although it didn’t seem to hamper them too much against Poland, this Czech team lack creativity without the Arsenal man attempting to pull the strings.

Missing Men (Portugal) – A decent striker. For as long as I can remember, Portugal have been missing that out and out striker who will score in the big games. They have performed admirably with the likes of Nuno Gomes, Pauleta and Helder Postiga leading their forward line, but how much better would they have done with a world class striker leading their line

Prediction – Portugal to win this by a couple of goals, with Ronaldo getting on the scoresheet at least once.