Arsenal are one of the Premier League’s in-form sides and the Gunners moved to the top of the table after a hardfought 2-1 victory against Roberto Martinez’s Everton on Saturday evening. Goals from Olivier Giroud and Laurent Koscielny were enough to earn all three points for Arsene Wenger’s side to cap off an excellent seven days for the north London outfit.

Last weekend, Arsenal earned a 3-0 victory away at Watford, while they kept their Champions League dreams alive with a phenomenal 2-0 win against Bayern Munich earlier in the week.

Wenger was clearly overjoyed at Arsenal’s victory on Saturday night, particularly as the Toffees pushed the hosts close in the latter stages. Romelu Lukaku struck the crossbar with little over ten minutes remaining but Martinez’s men couldn’t find that all-important equaliser as the Gunners held on for the win. Arsenal are really starting to click and gel as a team and they will be eager to push on and rack up as many points as possible in the coming weeks.

Earlier this month, the Gunners hit top form as they thrashed Louis van Gaal’s Manchester United at the Emirates Stadium, and they will need to continue their form and build momentum ahead of a tricky run of games.

Wenger on going top of the league: "After ten games we are there. Let's keep our head together and fight for the future." #AFCvEFC

After plenty of speculation and criticism throughout the summer, Arsenal’s decision to keep Arsene Wenger at the helm is beginning to pay off. While he didn’t invest in a new striker during the transfer window, Theo Walcott and Olivier Giroud are thriving and both players have really stepped up to the plate to spearhead Arsenal’s attack.

Mesut Ozil is perhaps playing his best football in an Arsenal shirt and Alexis Sanchez looks back to his best after recovering from his early season injury problems. Things aren’t perfect at the Emirates Stadium but they are certainly improving quickly and are full of confidence right now. The home fans are being treated to an array of attacking football and plenty of goals, at a rate of £103 per goal for Arsenal’s average season ticket holders. 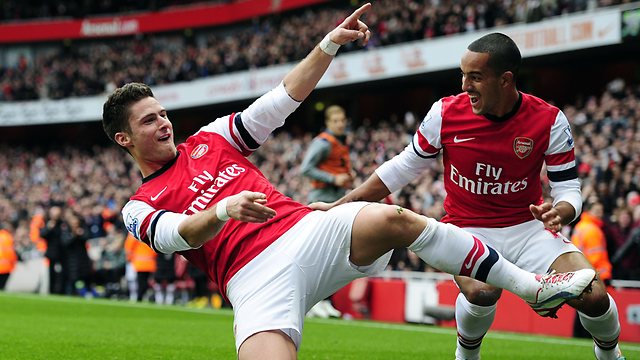 Defensively, Petr Cech is really starting to show his worth as Arsenal’s number one goalkeeper. While Asmir Begovic has struggled to stop the flow of goals at Chelsea, Cech has been instrumental for the Gunners throughout the early stages of the campaign. The Blues may be regretting letting the goalkeeper, who won four Premier League titles during his time at Stamford Bridge, leave the club. Chelsea’s struggles are, however, Arsenal’s gain.

There are still plenty of points to be won so it would be foolish to suggest that Arsenal are well on their way to winning the title. However, they have shown plenty of signs that they are truly ready to challenge for England’s top trophy and it wouldn’t be a huge surprise to see Wenger’s men go all the way for the first time since 2004 this season.