Before a team can properly attack in the attacking phase there must first be an understanding of shape, possession and combination play. The collection of these concepts will form a teams patterns and principles of play. Shape describes the position of the players in relation to the ball and their movement within that shape.. A team that understands shape has the ability to possess the ball and as the concept of shape is understood possession will then follow. Usually, the team that has the possession advantage will find itself in a much better situation to win the game. Therefore training a team in basic attacking shape directly leads into training a team to possess which ultimately puts a team in a position to be win the game. 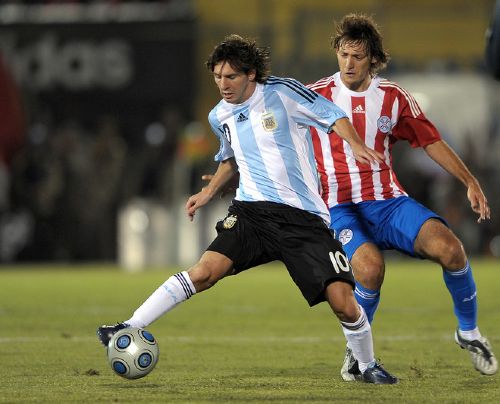 Shape can best be described as the position that the players take on the field and movement they make in relation to the ball. Good attacking shape as three distinct qualities: Length, width and depth. The goal is to make the playing area as long (length) and as wide (width) as possible while giving as many options of support (depth) to the player on the ball. A team that instinctively attacks with great shape will open the field by spreading the defense apart creating seams to play into. These seams can be used for the attacking team to exploit the defense. As this shape is used properly the team can then possess and attack efficiently.

Possession is the ability of a team to keep control of the ball thru accurate passing and dribbling; the quicker the better. Good team shape is the key to possession as a team that spreads the field creates the space needed to possess the ball. An effective way to train players to play quickly and effectively is by training them to use principles of play. The principles of play will be easy for the players to remember during the game. Soccer is a game that flows and moves quickly so there are no set plays. Instead there are patterns of play and organized movement which comes from the shape of the team. A team that understands principles of play will play organized, quickly and efficiently. Furthermore they will be able to quickly adapt and react during the match as they will have a set thought process of how to attack and how their teammates will be attacking.

Once the team understands possession and shape it is time to progress to the roles of the first, second and third attackers in relation to the ball.. A team that understands how to use shape and possession will create attacking opportunities. As opportunities present themselves it is important for players to understand the different roles in attacking. This refers to the players roles in relation to the ball. Naturally, the first, second and third attackers have different roles and responsibilities. The first attacker refers to the player who is on the ball and his main purpose is to maintain possession while attacking space.The second attackers are the players in immediate support, meaning one pass away from the ball. Finally the third attackers consist of the rest of the team; players who are more than one pass from the ball. Their role is to unbalance the defense making room for their teammates while at the same time presenting dangerous options to the first and second attackers. Their role is to make runs, working off the ball, to create dangerous opportunities either for themselves or for their teammates by placing themselves in the most dangerous space.

More advanced tactical training focuses on the difference attacking patterns in the various thirds of the field. The thirds are the attacking third, the middle third and the defending third. Within in these thirds exists different roles and responsibilities for different players. Training in thirds moves into very position specific patterns and movements of the players attacking in these thirds. Attacking in the attacking third is far different from attacking in the defensive third. When attacking in the defensive third success is defined by getting out of the back and finding the open space, while success in the attacking third is defined by putting the ball in the back of the net. So, before training a team in the six different types of play in thirds, it is essential to understand what the six are and how success is defined in each third. After this is understood a focused detailed practice plan is essential for a successful session. A successful session leads to understanding. When this happens the team will understand how to move in different thirds of the field. When this is combined with basic tactics and technical skill they will have the ability to be a truly dangerous team.