Wayne Rooney has been building his reputation of a world class football since he was 16. Now at 25, he has achieved a lot at Manchester United, including several Premier League titles and of course, the Champions League medal. Rooney has been one of the players at United who had great performances but played with other legends of the club, including Van Nistelrooy, Ryan Giggs, Paul Scholes and Ronaldo, but it now seems that Wayne Rooney is the most decorated player for Manchester United. He has a great football mind, as his passing range is quite fantastic. He is also capable of scoring a brilliant goal now and then. 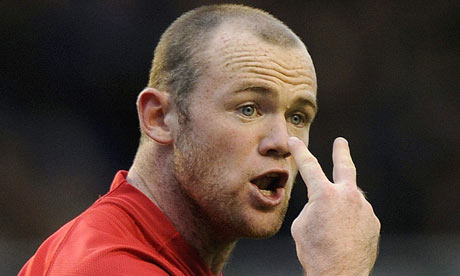 Wayne Rooney made a name for himself when he scored the goal of the month for Everton in their 2-1 win against champions Arsenal, at the age of the just 16. And when the next big national tournament started (Euro 2004) then Rooney was included in the squad and turned out to be a great success. He scored 4 goals in the tournament, until he injured himself, and in the same match England were eliminated. Wayne Rooney was then to join Manchester United after that summer, and never failed to live up to expectations scoring a hat trick on his debut. He has scored some of the greatest Premier League goals in history, and none more spectacular than his one against Manchester City last season, a truly remarkable over head kick.

Wayne Rooney has already had a special career, and is regarded as one of the special players in the Premier League. He has scored brilliant goals, and quickly becoming a United legend. Rooney has great desire, willingness to win, power, energy and technical ability all complied into one great player who is always talked about, even for the wrong reasons. He has a had a few disappointing times in his career, getting sent off for England against Portugal in the 2006 World Cup, but perhaps his biggest regret may be what happened last season. Wayne Rooney had wanted to leave the club, and stated Manchester United no longer had it’s ambition.

Rooney was quickly hated by United fans with some fans causing problems outside his home. Rooney then changed his mind about the club, and decided to stay another 5 seasons, and repeatedly said since that he loves the club and will be at Manchester United for a long time to come.