Messi is undoubtedly the best player in world football now, and arguably the greatest of all time. Not long turned 24, yet has achieved so much in football in terms of medals and maintaining a special ability. Messi has unbelievable ball control, dribbling, balance, finishing, passing which makes him the top player. Messi takes on players for fun time and time again, and plays majestically in a great Barcelona side.

As I have mentioned, Messi is only 24 years old, so has plenty of time to achieve so much more. He is a quick player, but doesn’t really on pace. So there is no doubt Messi can keep up this form to his 30’s so who knows the future has in store for this footballing marvel. Last season 55 goals in 53, which just emphasizes the threat he contains. The opposition team and fans can literally have nightmares over facing this lad, cause he is just that dangerous. 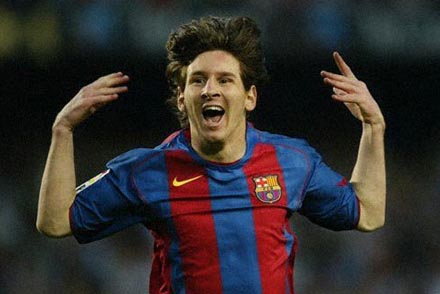 Messi has always been seen as one of the World’s best, even in his teenage years as he burst onto the scene at Barca. He came off the bench, and impressed every time and everyone had the feeling he could be something special. The way he moved, his agility was for all to the see, and his ball control was terrific. His career has witnessed him score a hat trick against Real Madrid, and also two goals similar to those famous goals of Maradona. Maradona scored two well publicised goals against England back in the 1986 World Cup, the first which was by his hand, and the second where he took player after player on to finish one of the greatest goals of all time.

Messi has somehow copied these goals in his time for Barcelona, therefore sealing his position as ‘the next Maradona’. But he can become ever better than Maradona, if he continues the way he is, and some already think he has surpassed him. He has won the Champions League 3 times for Barcelona, and scored against Manchester United in the final of 2009 and 2011, as well as man of the match performances.

I am going on and on about how good he is, so I must give him some criticism, and it’s hard to find something but what disappoints me is when a major international tournament comes up, i.e, the World Cup, he fails to rediscover his Barcelona form for Argentina. World Cup 2010 he looked good, but didn’t score and looked clueless when the team were knocked out 4-0 by Germany. His time will come on the biggest stage of all, but until then, he definitely has something to improve on, and make him the greatest of all time, without debate.