Theo Walcott is still a young player, looking to improve his somewhat raw game, there is no doubt any player in the world would love his electric pace, but to be considered as the next Henry, he is going to have to improve a lot! Walcott has been quoted by the English press in recent days, that he wants a new contract, but would like to play a forward role, and try and emulate what Arsenal legend Thierry Henry did for the club. We have a go at the press sometimes for labelling players up to the next superstar, but do we rarely find that a player wants to big himself up to the rest of the world.

Theo Walcott, still only 23, has been playing for Arsenal for 6 seasons now. Walcott possesses a great threat with his pace, and ability to run at ease past players. However, it is also clear to most football fans, that he has always been unable to improve his technical game, as well as his strength. Walcott could be understandably one of the most frustrated players in the Premier League, and many don’t seem to think he has a ‘football brain’. 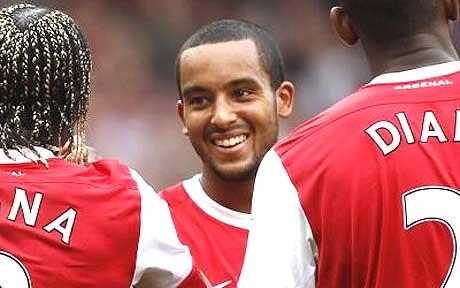 Have physical attributes is one thing, but being able to understand the game inside out, is another skill Walcott seems to be missing out on. Arsenal are one of the best teams in the Premier League at playing good football, and have clever players throughout the squad. Theo Walcott sticks out like a sore thumb whenever I come across any Arsenal matches, and can be likened to a ‘headless chicken’. Half of the time he plays, he fails to run with the ball. First touch, passing and decision making as always been his downfall, and proves that having blistering pace is not enough.

Thierry Henry is perhaps the biggest Arsenal legend of all the time. Scoring hundreds of goals, and won numerous FA Cups and Premier League titles. He was awarded player of the season on three occasions, and without doubt makes the all time Premier League team. Thierry Henry also had electric pace, but with that he created goals with superb passing, involved in great passing moves, able to beat players, stay on the last man and was often clean through on goal due to clever running and timing. None of which you associate Theo Walcott with.

Walcott isn’t a regular starter for Arsenal, and finds himself on the bench now and then for Arsenal. He recently rejected a £75,000 contract and talks are still ongoing with him and Arsenal. Once Wenger signed him, he must of seen the potential, but truth be told, he hasn’t become anyway near the player some people had labelled him as when he was a late teen. Players still mature at this age, but Wenger may soon be frustrated and let him leave the club. Walcott should be grateful to be at a club like Arsenal, known to make footballers instead of buying them, but perhaps needs to focus on his own game more than anything else.