Didier Drogba is one of the greatest strikers playing football today. There are a collective few of strikers which can have great strength, heading ability and technical ability that Drogba has. Defending against Drogba is never easy, as he has immense power and such a keen eye for goal. Drogba has won the Premier League a few times with Chelsea, as well as FA Cups, but the title he is missing is the Champions League, where Chelsea got so close in 2008. Drogba, although in his 30’s now, is still a lot to handle, and is always on the Chelsea first team sheet.

Drogba started playing in France when he started his football career and his first big move was to Marseille. He played one season at Marseille, but it was a truly fantastic one and is still regarded as a club legend. He moved to Chelsea for £24million as Jose Mourinho was keen on what he saw. His Chelsea career couldn’t of started better, as he won the Premier League title in his first two seasons, and was regarded as one of the best Premier League strikers that season. Drogba has won the title for a 3rd time, as well as the FA Cup on three occasions. Drogba was captain for Ivory Coast in the 2006 and 2010 World Cup, but unfortunately they were eliminated in the group stages, and both years they were given extremely difficult groups. 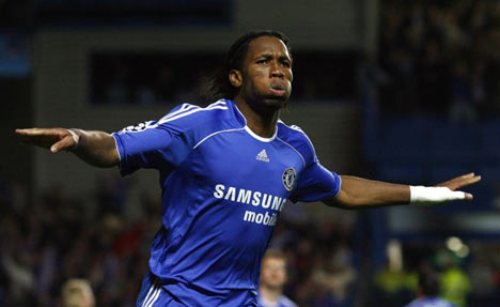 I personally think that Drogba is a great player, as on his day he can be undefendable, he is that good. He scores all types of goals, headers, cute finishes, tap-ins, long range shots and that is what I admire from him. Last season there was times where he had dropped to the bench because of the arrival of Torres, but it did seem as if the Chelsea fans were a bit frustrated with that decision. Torres played against Manchester United in the quarter finals and looked nonexistent before Drogba came off the bench and had scored. There are aspects of Didier Drogba’s game that can frustrate the opponents fan or even Chelsea fans. He often goes to ground far too easily, and pretends as if he has got shot, when most of the time there has been very little contact. He often sulks a lot for his team, and has arguments with his own team players before. He got sent off in the Champions League final in 2008, for slapping Nemanja Vidic, which is a childish thing to do on the biggest of all stages.