There is no doubt that when Ronaldo hangs up his boots, he will be regarded as one of the best players of all time, and there is still plenty of time left in this lads career. At the age of 26, he has many years left in him and his fitness and dedication to the sport cannot be faulted, so there is more time for Ronaldo to achieve even more in this sport. At Manchester United, Ronaldo had won everything possible in England. Three Premier League titles, with a couple of Carling Cup successes, FA Cup success and winning the Champions League in 2008 in his 5 years at Manchester United. From 2006 to 2009 he was arguably the best player on the planet, and his goal scoring record was phenomenal.
In his first few years at United, he was definitely getting a reputation as one of the most hated players in the world. Ronaldo joined United, who are probably the neutrals least favourite team in England, and started to get slated at for his diving antics, who constantly moaned at referees and felt as if he was never treated fairly. The public’s hate towards Ronaldo grew at the 2006 World Cup. During the Portugal v England quarter final match, he played a part in getting United team mate Wayne Rooney sent off. 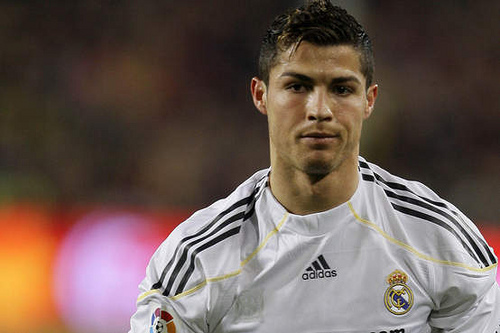 Ronaldo also dived constantly throughout the tournament, and was disliked from all national fans as well as England’s. After the World Cup, he returned to Man Utd and received abuse from fans. Ironically, he then matured as a player and improved from strength to strength. He scored 42 goals in the 2007/2008 season, as Real Madrid were then very keen on signing him. However, Ronaldo decided to stay for one more year, as Man United lost to Barcelona in the Champions League final, which would be Ronaldo’s last game for the club.

Real Madrid signed Ronaldo for £80million, which is the biggest amount of money spent on a player of all time. He also earns more wages than any other player in the world. Ronaldo has been brilliant since joining Real Madrid, scoring 66 goals in 63 appearances so far for the club. Ronaldo is one of the quickest players in the world, and his goal threat is unbelievable as he can score all types of goals. Set pieces, headed goals, right foot, left foot, long range, good finish and even there for most tap ins.

Ronaldo scored the winning goal in this season’s Copa Del Rey final, as they beat Barcelona 1-0. However, Messi and Barcelona would have the last laugh, winning the Champions League and the league. Ronaldo is now more famous than ‘The’ Ronaldo who won the World Cup with Brazil, but it’s a shame this player is playing the same time as Messi, arguably the best player of all time.