Brazil was not experiencing the best of times in this year’s Copa America after only being able to draw in every single one of their previous matches, last night they placed their stamp and proved why they are considered to be the future of Brazil.

With a comfortable victory against Ecuador that saw Alexandre Pato of Ac.Milan and Neymar of Santos both scoring 2 goals each and giving their national side more than enough points to qualify into the next stages of the tournament.

Coach of Brazil Mano Menezes, decided to make some changes at the start of the encounter and so he placed Douglas Maicon as the right back instead of Daniel Alves and also inserting Robinho into the Starting XI squad.

Now going into the actual game, Brazil started off dominating for the first minutes of the match while Ecuador was forced to defend and try their luck on the counter-attack although it did not go as planned for the Ecuadorians as they conceded a goal in the 28th minute. 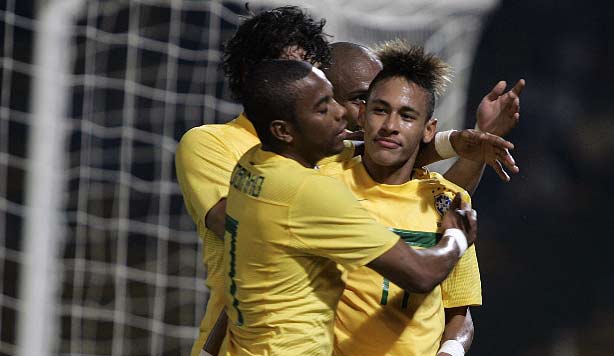 The first goal arrived when Andre Santos made a inch perfect cross over to the ongoing Alexandre Pato who made no mistake in heading the ball past the Ecuadorian goalkeeper and into the net.

With the match in favour of Brazil, it was Ecuador that gave everyone a surprise when they equalized through a shot coming off the feet of Felipe Caicedo. The Ecuadorian striker took a shoot from the penalty area and launched a low strike and Julio Cesar was not able to deny it.

The second period arrived and within only 4 minutes Brazil took the lead once again and this time with Neymar who took a powerful striker after receiving a beautiful pass from Ganso and so Brazil was in the lead 2-1.

The joy of the Brazilian did not last long as Ecuador was from being done and they equalized everything for the 2nd time.
Not much of a surprise it was Felipe Caicedo who took a very similar shot as his first goal and Julio Cesar just wasn’t playing his best game ever and so the match was 2-2.

But Brazil needed a win in order to qualify into the next stages and so they continued their attacks and Alexandre Pato found the net as he scored his last goal of the night due to a rebound given by the opposition’s goalkeeper.

Finally the last goal was scored by Neymar who received the ball at the center of the penalty area and he simply tapped it past Marcelo Elizaga of Ecuador and ending the match 4-2.

With this result Brazil advances into the quarter-finals and faces Paraguay while Ecuador is disqualified.